Research raises awareness of COVID-19 across the Congo Basin 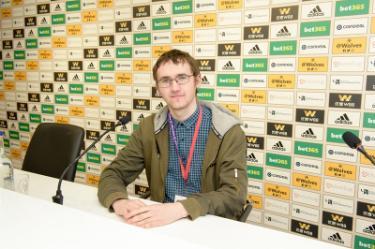 For any student while studying a degree whether at College or University, gaining Work Experience is an invaluable part of their journey to reach their goals. Since arriving at the University of Wolverhampton to study for a degree in Multimedia Journalism, my goal has been to become a sports journalist and for the last three years, I have learnt so much that is going to help me to achieve that goal.

When I was asked to go along to Molineux to help present Wolves manager Nuno Santo with an Honorary Doctorate award and to go behind the scenes in the Media, I could barely control my excitement. The day for me started at midday outside Molineux, where I met Mags Winthrop who is the Digital PR and Communications Manager at the University. As I collected my Press Pass, it completely hit me how privileged I was to be part of the day.

We were shown to the Press room which was filled with Journalists from different news organisations. I was then briefed on how the day was going to go and that my role was to observe, assist whenever needed and to gather information to write this blog you are reading now.

Being in the Press room before a match was pretty much as I expected it to be, full of Journalists on their computers typing furiously and fully focused.

It was soon time to move downstairs to where the gowns were being put on for the mini graduation ceremony – due to take place on the pitch before the last home match of the season.  As this was going on, I learnt how being prepared at all times is crucial as I watched as Mags manage to grab a quick interview with Wolves legend Steve Bull.

Then it was time to go to the tunnel where Nuno was all ready to go out with us all. Despite this happening half an hour before kick off there were still a good number of people in the ground to greet us all. Walking through the tunnel and onto the pitch was a surreal experience and something I won’t forget and to be so close to Nuno as he received his award was an absolute privilege.

I’ve lived in Wolverhampton for the last three years and in my first year Wolves were struggling in the Championship and going through a tough time, it was a lot easier to get a ticket than it is now. But since Nuno Santo has arrived at Wolves, he has given the city a team to be proud of and who can compete with the very best teams in England - to finish in the top half of the Premier League table in their first season back as well as reaching an FA cup semi-final is unbelievable. Nuno deserves this award very much and I was blown away by how humbled and honoured he was about receiving the award.

After that we watched the match between Wolves and Fulham.

I’ve been at Molineux before to watch a match so I knew what to expect in terms of atmosphere but I’ve never sat in the Press area. I was intrigued to see all the different sports reporters who were reporting on the game in different ways for example there were some reporting through social media, live commentators for TV and Radio, there was one reporter from Sky Sports reporting live for the programme Gillette Soccer Saturday and there were reporters writing for an end of match report.

The game finished 1-0 to Wolves after a second half goal from Leander Dendoncker. As it was Wolves’ last home game of the season the players after the game did a lap of honour to thank their fans for supporting them throughout the season.

When I was briefed at the start of the day the thing I was looking forward to the most was being able to sit in on the after-match Press Conferences.

As I went back into the Press Room it was much different than before with big cameras set up to record the whole thing. As I sat there listening to Nuno answering questions from the journalists, I was intrigued at how reserved and cautious Nuno’s answers were and he looked a bit irritated when asked about Dendoncker’s goal being a welcome reprieve since he gave away the penalty that led to Wolves losing the FA Cup Semi-Final in extra time.

There weren’t too many questions asked so the press conference only lasted about 10 minutes or so whereas when Fulham Interim manager Scott Parker came in there were more questions to ask, particularly about his future as a manager and whether he would want the Fulham job permanently.

In a press conference many follow up stories can be written based on the answers given, so for a journalist it’s very important they ask the right questions - sometimes difficult ones - that will provoke a response to create a good story. For example, during Scott Parker’s press conference he said that he will be a football manager even if it isn’t at Fulham which could make a great follow up story.

The day overall was great experience for me as I saw close hand how much work, commitment and dedication it takes to be involved in the media. It also has great perks and being paid to report on football matches is an incredible job and one that I am determined to be a part of. The best way to describe how I felt about the day is that it was the most important experience I have had in my three years studying Multimedia Journalism and it will look great on my CV!